In Finnish, maailma means “world” and is a compound of the nouns “earth” and “air.” The transliteration “earthair” rings reminiscent of those modernist Poundian archaisms like “earth-weal,” and differs in its chthonic emphasis from the abstraction of the Latin “mundus.” “Maailmasta toiseen” simply means “From one world to another” and implies the convergence of several linguistic and geographical realms in a single place.

Before the scourge of Covid-19, “Maailmasta toiseen” was conceived as a literary festival in Spanish, Portuguese, and Finnish. It was to take place in Helsinki during Abril 2020. The featured authors would offer a fresh and diverse sample of literature in Iberian languages, as well as reflect on its reception in the land of the Kalevala. Authors from Spain and Latin American based in different European cities would give readings throughout Helsinki. Experienced Finnish and Swedish literary translators were scheduled to share their insights into the communicating vessels between these two spaces.

The cooperation of the Spanish Embassy, the Embassy of Mexico in Finland, as well as Helsinki University, NOXLit Nordic Exchange in Literature, and the Arts Promotion Centre Finland (TAIKE) has made the festival possible in a partially virtual format. Thanks to the contributions of translators Tarja Härkönen, Sofia Sandqvist, Anne Ketola, Isabel Granados and Emma Toukonen, this page offers a sample of the works of the authors who will appear in the screens of the Finnish cyberspace in the coming weeks, to exchange their vision of the literary present, the shape-shifting cultural panorama in the Iberian-American world, and the possibilities of an art open to globalized uncertainty.

In A Retornada, Laura Erber dives into the trepid space between the coma and wakefulness, between sensoriality and a thought incapable of grasping itself.

Ursula Ojanen will share her experiences in the translation of the monumental Kalevala to the language of Cervantes, as well as her labor of promotion of Finnish literature in the Spanish-speaking realm.

In La belleza, Roxana Crisólogo paints a persuasive analogy between the unrest of South American social life and the dictate ruling our notions of bodily aesthetics.

David Gambarte inquires into the fleeting constitution of “Puberty” and shares his experience of writing Spanish-language poetry in Finland.

Versed in the devices of the avant-garde and the absurd, Leonardo Teja shares a fragment of his opera prima, Esta noche el Gran Terremoto.

Isabella Portilla draws in a few lines her literary ethos and establishes an analogy between the rebellion against the philosophical tradition and the rejection of inherited family archetypes, in A mí mamá.

In Unir con oro los fragmentos,  Giorgio Lavezzaro undertakes a reconstruction of broken affects, by means of a literary variation on the Japanese technique kintsukuori.

In Metro Insurgentes, una ruina circular, Georgina Cebey embarks in an architectural inquiry of that which the encyclopedias about Mexico City never document: the decay of urban projects, the effect the ruins have in the collective psyche.

Petronella Zetterlund will share her challenges in translating contemporary Swedish poetry into Spanish and bridge-building between the Nordic literary scene and Mexico City.

In Diego Olavarría’s “Relato de origen,” Salt Lake City’s baffling mythology works as a backdrop to a meditation on the communicating vessels between biological birth and the perpetual renovation inherent to travel.

Alejandro Pedregal traces and documents the winding journey of a Mexican woman who became a bulwark of the rural struggle against globalized plunder, in Evelia: testimonio de Guerrero.

In a realm where the human and the animal blur into each other, Rodrigo García Bonillas’s Mandril depicts a circus and a series of beasts who experience and reflect on slavery, eroticism, and other murky forms of sociality.

Anne Ketola will share her experiences in the translation into Finnish of various foreign authors, including the community of Spanish-speaking writers in Finland.

In “Lo más bello que he hecho en la vida“, Lucía Pi Cholula delves into Raúl Castro’s labor in the ripening of Cuba’s revolutionary movement, and finds the corners History can not exhaust: the intimate, personal decisions opposing a human’s life to its political symbolization.

Additionally, this sample includes “Carta ao pai” a text by Brazilian poet Ricardo Domeneck, who will be a guest in next-year’s iteration of Maailmasta toiseen.

In this conversation, writers will address territorial and globalized aesthetics in the context of Spanish and Portuguese fiction and journalism. What stories, characters or subjects are recurrent in contemporary literature? Where are the new spaces of transgression? How does the era of post-truth affect the relation between fiction and journalism? What parricides and what resurrections are happening before our eyes in the landscape of contemporary literature? What are the best kept secrets of literature in Spanish and Portuguese?

September 16th, 5:30pm Online Transmission from the Embassy of Spain in Helsinki. Moderated by: José Luis Rico Featuring: David Gambarte (Spain/Fin), Roxana Crisólogo (Per/Fin), Laura Erber (Brazil). In this conversation, poets will address territorial insertion and globalized aesthetics in the context of Spanish- and Portuguese-language poetry. Are the notions of avant-garde and canon still operational in today’s landscape? What is the future of traditional concepts like “meaning,” “beauty,” “sacred,” which have guided the understanding of poetry for so long? What parricides and what resurrections are happening before our eyes? What are the best kept secrets of poetry in Spanish and Portuguese?

In this conversation, translators will expound on the translinguistic negotiation of meaning, its pleasures and challenges, in the context of literature. Is a translator still a gatekeeper? What are the risks of recanting literature in languages as different as Finnish and Spanish, Portuguese and Swedish? What does “abroad” mean in contemporary Iberian languages? Is there an Atlantic divide in literature? A Northern- and Southern-European divide? What are the best kept secrets of literature in Spanish and Portuguese?

September 17th, 5:30pm
Online Transmission from the Embassy of Spain in Helsinki.

In this conversation, writers will address territorial and globalized aesthetics in the context of Spanish and Portuguese cultural essay and theory. What are the objects of predilection of the contemporary essay? What is the role of Spanish- and Portuguese-language theory in an academic world so influenced by English and the Anglo-Saxon tradition? Is there still an Atlantic divide in literature? A Northern- and Southern-European divide? What parricides and what resurrections are happening before our eyes in the landscape of contemporary literature? What are the best kept secrets of literature in Spanish and Portuguese? 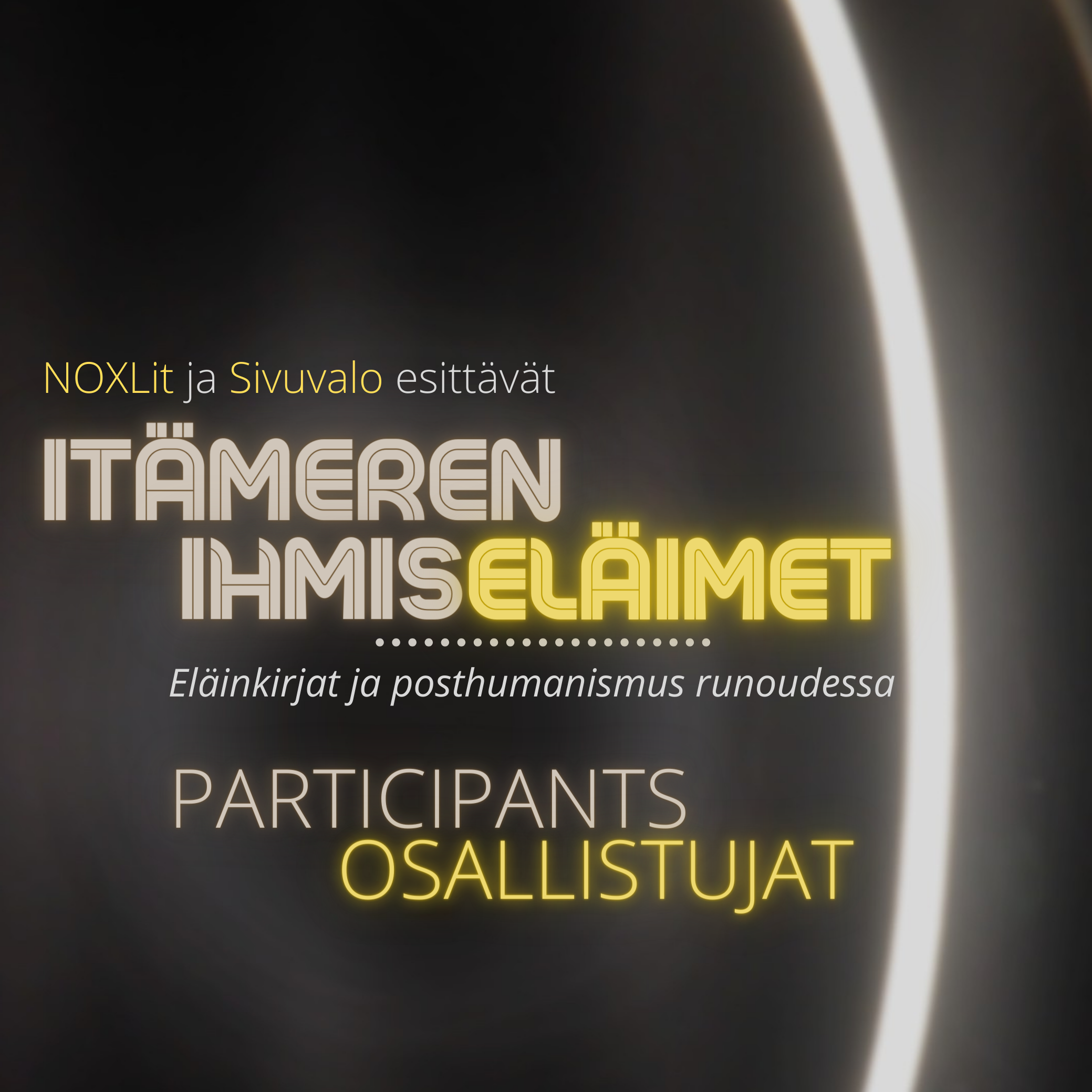